The reactions (numbered) are illustrated in this metabolic network. 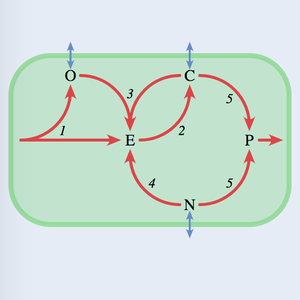 There were two further processes: diffusion and cell division. Diffusion caused the amounts of C, N and O to move between neighbouring cells, from where they were more concentrated to where they were less concentrated. Oxygen also diffused between cells and the environment, where its concentration was fixed. Cell division occurred when a cell accumulated 1000 units of P. At this point, 1000 units of P were removed and the amount of the other metabolites was halved. Then a daughter cell was created with the same amount of each metabolite as its mother.

Since the success of a genome was determined by the speed at which the filament reach a threshold number of cells, evolution was effectively selecting for cells (or filaments of cells) that maximised protein production.